He is one of the pioneers of the “Harsh Noise Wall” and he defined the genre.

In it, noise is continuous, monolithic, and yet perceived differently by each listener.

Romain Perrot has released more than 300 recordings and regularly performs live, within the international noise scene. For the past 20 years, he has conducted many solo or collaborative projects.

The harsh noise wall is a continuous, monolithic wall of sound, hyper powerful, and manufactured with the bare minimum.
His craft is to completely immerse the audience in a wall of white noise: a sound composed of all audible frequencies, each frequency having the same energy.
Under the project name "VOMIR", Romain Perrot uses walls of white noise to account for the feeling of confinement and isolation by sound.
For the duration of his performances, he leaves his machines running and remains standing, motionless, back to the public with a plastic bag on his head.

'heavily distorted organ mingling with the damp and mould and scrape of corroded metal. But there’s loveliness peeking through as well, bleached-out melodie' 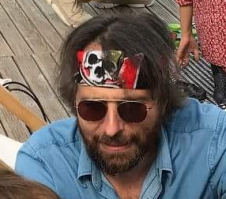